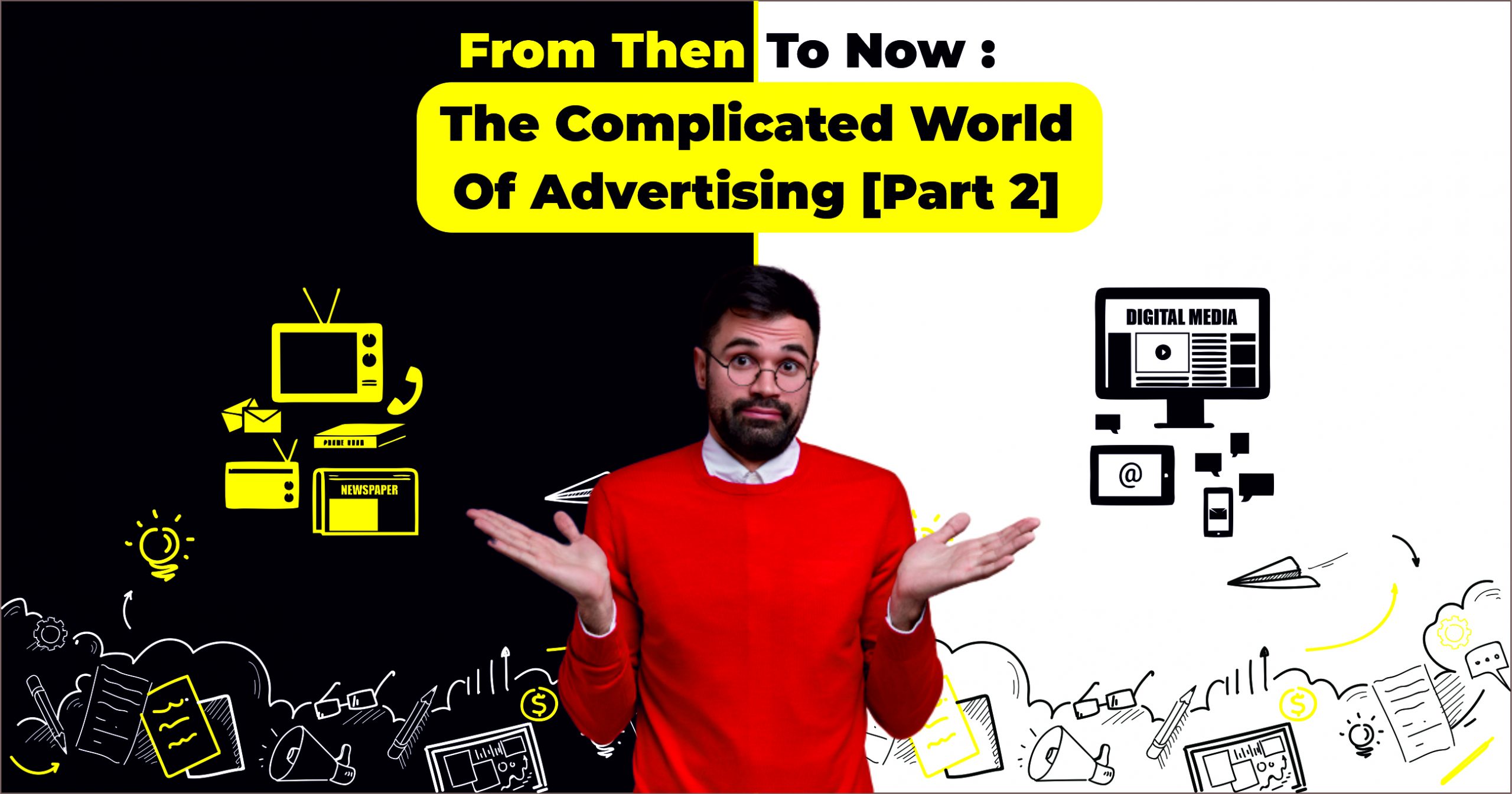 Advertising is just about presenting a product right?

That’s primarily how it started anyway. It started with the mere need to spread awareness about a product or service that might interest people. We explored how advertising worked in Ancient Egypt till the first ad to appear on television in Part 1. But even before the internet took the world by storm, marketing and advertising were already prevalent before the mediums changed. Let’s look into what makes today’s advertisements different from the ones gracing the walls of  Pompeii.

Advertising turned into a movement when it came to radio and television in the early 1900s. Talking directly to the masses through this medium added a level of personalisation that was never explored before. Trust has always played a determining factor in a consumer’s buying choices.  The first radio advertisement appeared in 1922. Radio host H.M. Blackwell created the “direct indirect” method with a 10-minute talk that revolved around the benefits of living a carefree life at the Hawthorne Court Apartments in Jackson Heights, Queens. The fee for a 10-minute time slot was US $50.

Alongside, television advertising became the primary means of effective branding. Brands were suddenly able to put visual representations of their products directly through to their customers. This was also the start of video marketing.  Television advertising was a great way to expand reach, increase customer awareness that ultimately led to increasing sales.  The use of characters and actors in TV commercials became a popular way to make brands relatable to people.

It played a crucial role in the development of advertising culture and successfully placed the product in the foreground. [See commercials for Amul, Nirma and many more.] Even some famous faces like the  Marlboro Man (in the western realm of advertising) from the 1960s to 1990s were used to brand and re-brand to appeal to a larger audience.

So, from Egyptian carvings to television and billboard advertising, the product was at the centre. The very purpose of advertising was to highlight a product. The characters associated with brands mainly embodied the essence of their product but never took the spotlight from it. But the most important invention of all times changed the entire field and scope of advertising. That’s right- we are talking about the worldwide web or yeah, www for short

The revolution of advertising started when the first digital banner ad went live in October 1994 by HotWired. Ad spaces were sold by networks and banners were created by editing the HTML code.

While the first banner doesn’t pack a punch by today’s standards, it was a marvel back then. The fact that it had a 44% CTR proves just that. But it was just time before advertisements started focusing on different demographics. Two years later, the first online advertising platform, DoubleClick (acquired by Google in 2007) came into the limelight. With the constant creation of market spaces through Google Ads and Facebook, advertisements started taking over the world. They were everywhere and consumers could not possibly escape them. Even with personalised advertisements, the product was always at the forefront.

So what changed? With online OTT platforms and the different mediums of video consumption, consumers started getting the choice to skip advertisements. Meanwhile, around the 2000s, advertisements started popping up on mobile phones.  So in the age of ad blockers, how do marketers appeal to their brands? Correct, through personalisation and branding. People didn’t want to get behind a faceless brand they didn’t know about. Trust and loyalty came to people and not brands. Advertisements could no longer afford to simply show a product when dozens of similar products were competing in the market. Instead, the product took a side seat while problem-solving became the focus. User-generated content was the only way in which audiences would want to participate because no consumer was willing to be a passive participant anymore.

Zero Moment of Truth (ZMOT) study, conducted by Google, showed how consumers constantly absorbed content about various companies as well as conducted research before buying a product. It highlighted the need for companies and businesses to actually monetize content as well as actively participate in producing content. It was up to these companies to now participate in user conversations to raise awareness as well as fill that bridge of trust, something we call online reputation management. So with the emergence of social media platforms, a consumer could find a lot more about a company than just the advertisements they willingly put out. This gave the rise to proper branding beyond the product/services one provides.

And, thus, came the rise of the advertising world as we know it today.

Ask and you shall receive!

The Ultimate Blog About Blogs!

Subject: Email Marketing Is A Scam.